We will here give you Four good reasons to discover northern Spain. Spain is a large country and attracts millions of visitors every year. It is also a favourite destination for people looking to buy a second home or to relocate. But most non-Spaniards look to the southern parts of Spain, to get the warmer weather. However, by doing so, you are really missing out. Spain has so much to offer. Have you ever visited the northern parts? Here are four compelling reasons for why you should.

Northern Spain is an exciting mixture of mountains and ocean and with the milder weather greenery is lush and plentiful. The Picos de Europa (“Peaks of Europe”) is a mountain range forming part of the Cantabrian Mountains. The range is situated in the regions of Asturias, Cantabria and Castile and León. The highest peak is Torre de Cerredo, with a 2650 metres elevation.

The area’s history goes back to 1918, when don Pedro Pidal, Marquis of Villaviciosa, promoted the law to create the Montaña de Covadonga National Park, which was named Picos de Europa National Park on 30 May 1995. This natural area was awarded the UNESCO Biosphere Reserve designation in 2002.

The three main massifs are a natural wonder of beauty. There are deep valleys and gorges, peaks and rivers. The central massif is home to the highest peak, Naranjo de Bulnes or Urriellu Peak. Its 2,519 metres of difficult terrain have not prevented human settlements, the most famous being the village of Bulnes. Until 2001, it was accessible only via a steep, narrow mountain path. Since then, access to the village is easier thanks to the cable car that now serves the area and that cuts across the mountain from the town of Poncebos.

The eastern massif, the Andara, is the smallest of the three and has a softer profile. Its highest peak is Morra Lechugales at 2,400 metres. The westernmost of the three massifs is that of the Picos de Cornión, near the Royal Site of Covadonga, a place of pilgrimage visited by thousands of people each year.

Between the Urrieles and the Cornión and separating the central and western massifs from south to north, runs the River Cares, whose crystal waters rage throughout its course. Outstanding among the beautiful peaks of the western massif, rises La Peña Santa de Castilla at 2,596 metres. Ordiales Scenic Balcony, with a drop of almost 1,000 metres down to the valley below is located on the way to the peak. It is a stunningly beautiful place.

Another beautiful place is the geopark on the Basque Coast.

The Basque Coast Geopark covers an area of 90 square kilometres belonging to the  towns of Deba, Zumaia and Mutriku. It is one of the 120 UNESCO Global Geoparks. One part of the park is along the coastal area and is characterized by the cliffs that make up the Flysch and the inland area (karst area). There you can find the largest number of caves in the whole region.

Many people love Spain because of its many wonderful beaches. We all know there are some great ones in the south but also the northern part of Spain has some stunning beaches well worth visiting, with or without clothes.

Torimbia Playa in Asturia, located to the west of Toranda and sheltered by beautiful cliffs is a fantastic beach you can only reach by foot. Either you can take the paved path leading to the west side of the beach or you can try navigating the rougher trails along the hillside leading to the eastern side of the beach. Perhaps you would like to leave your swimsuit at home as this beach is one of Spain’s foremost nudist beach since the 60s.

Playa De La Concha.  This beach is the symbol of the coastal city San Sebastián, in the Basque Country. The beach is located in the Concha bay and many times it is referred to as the most beautiful city beach in Europe.

Playa del Silencio, the beach of silence is located in Asturia. It is a hidden gem and still, not many tourists know about it. It is stunningly beautiful and all-natural. This is not a sandy beach but you will rather find boulders, cliffs and gravel. And since it is all-natural, you need to bring whatever you think you may need, there is nowhere to buy snacks or water.

Playa de Rodas can be found on islas cies, the small islands off the Galician coast. It is a nice day out to take a boat and visit the island (there are three islands in total) and there are some wonderful beaches. Playa de Rodas is one and Figueiras is another one. The small group of islands together forms a nature reserve and they are all very beautiful.

To get an idea of what the northerners are like, why not pay an old village a visit. There are plenty of cute villages to choose from. Some are deserted nowadays but others still thrive mainly due to its beauty attracting tourists.

San Vicente de la Barquera is a tiny village with a population of fewer than 4000 people. It is located in Cantabria and attracts many visitors every year to its naturally beautiful environment, the Oyambre Natural Park.

Santoña is another lovely village located not far from Santander. One part is by the ocean in a bay with the same name and one part is mountainous. The town has close links to the sea, so much so it is Cantabrian’s major canning port. Its industry is based above all on the commercialization of tuna and its famous anchovies in olive oil.

Hondarribia is a town situated on the west shore of Bidasoa river’s mouth, in Gipuzkoa, in the Basque Country. The border town is facing Hendaye in France over the Txingudi bay. A service boat makes the trip between the two cities. The town holds an ancient old quarter with walls and a castle. In addition, Hondarribia features a beach across the Bidasoa from the touristy housing estate Sokoburu in Hendaye, alongside a mountain called Jaizkibel providing a hilly backdrop to the town. The town also harbours the San Sebastian Airport, which serves domestic flights making it easy to get to should you wish to visit Hondarribia

Santillana del Mar is a town in the Cantabria region. It’s known for its medieval towers, Renaissance palaces and the Romanesque Santa Juliana Collegiate Church. Southwest of town, the National Museum and Research Center of Altamira focuses on prehistoric life and art discovered in the nearby Cave of Altamira. 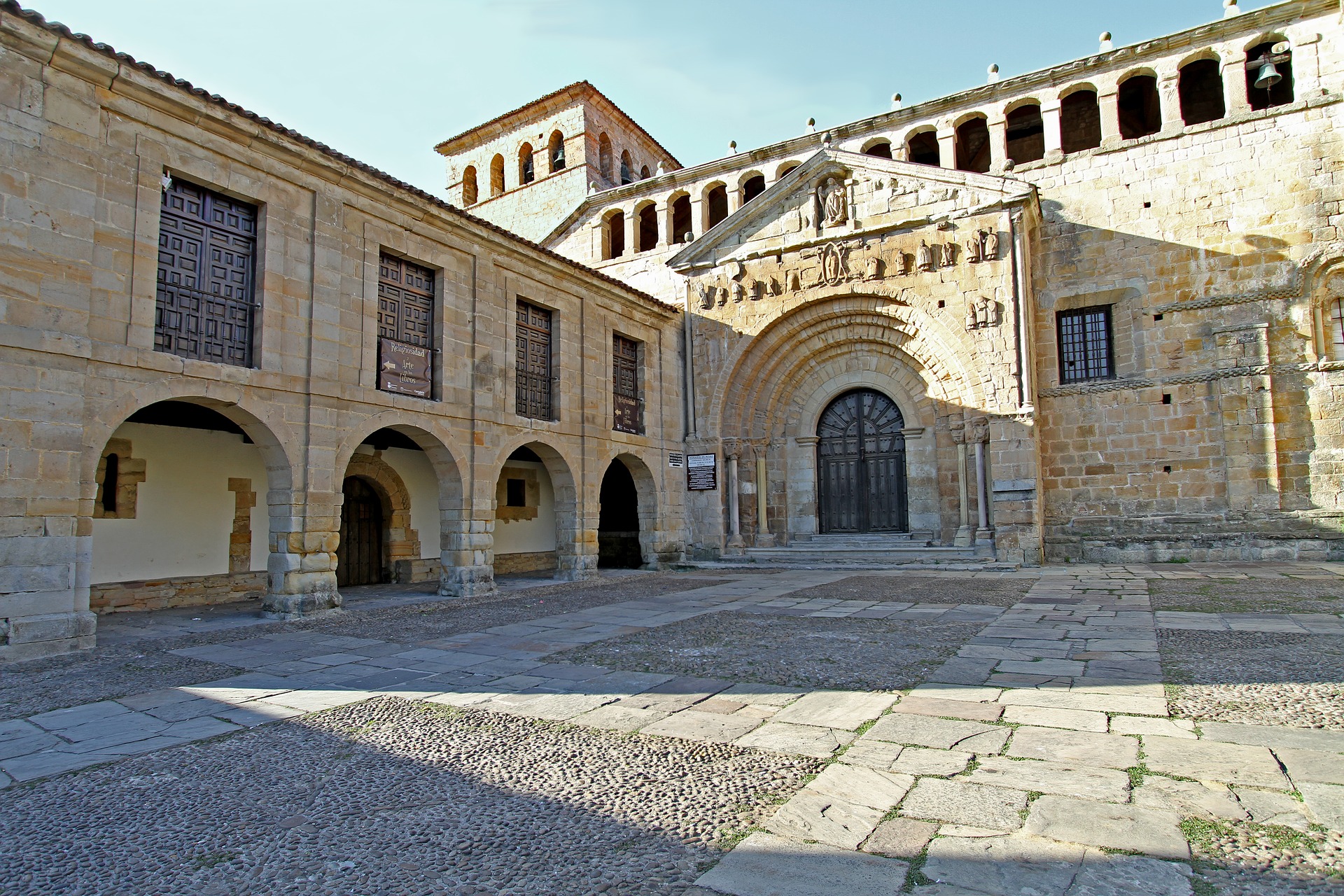 Comillas is a town in Cantabria and is a small haven for everyone interested in architecture, art and nature. Its Modernista architecture includes 19th-century El Capricho, a Gaudí-designed chalet. Nearby, elaborate, Neo-Gothic Sobrellano Palace has Gaudí furniture. In the old town centre, Plaza Corro Campios is full of restaurants and bars. Comillas Beach is popular for its fine sand and the many opportunities for engaging in different sports. And to the west, you will find Oyambre Natural Park with dunes, marshland and varied birdlife.

If beaches, cute villages and stunning nature aren’t enough to convince you to discover more of northern Spain perhaps some art and architecture is what it takes? 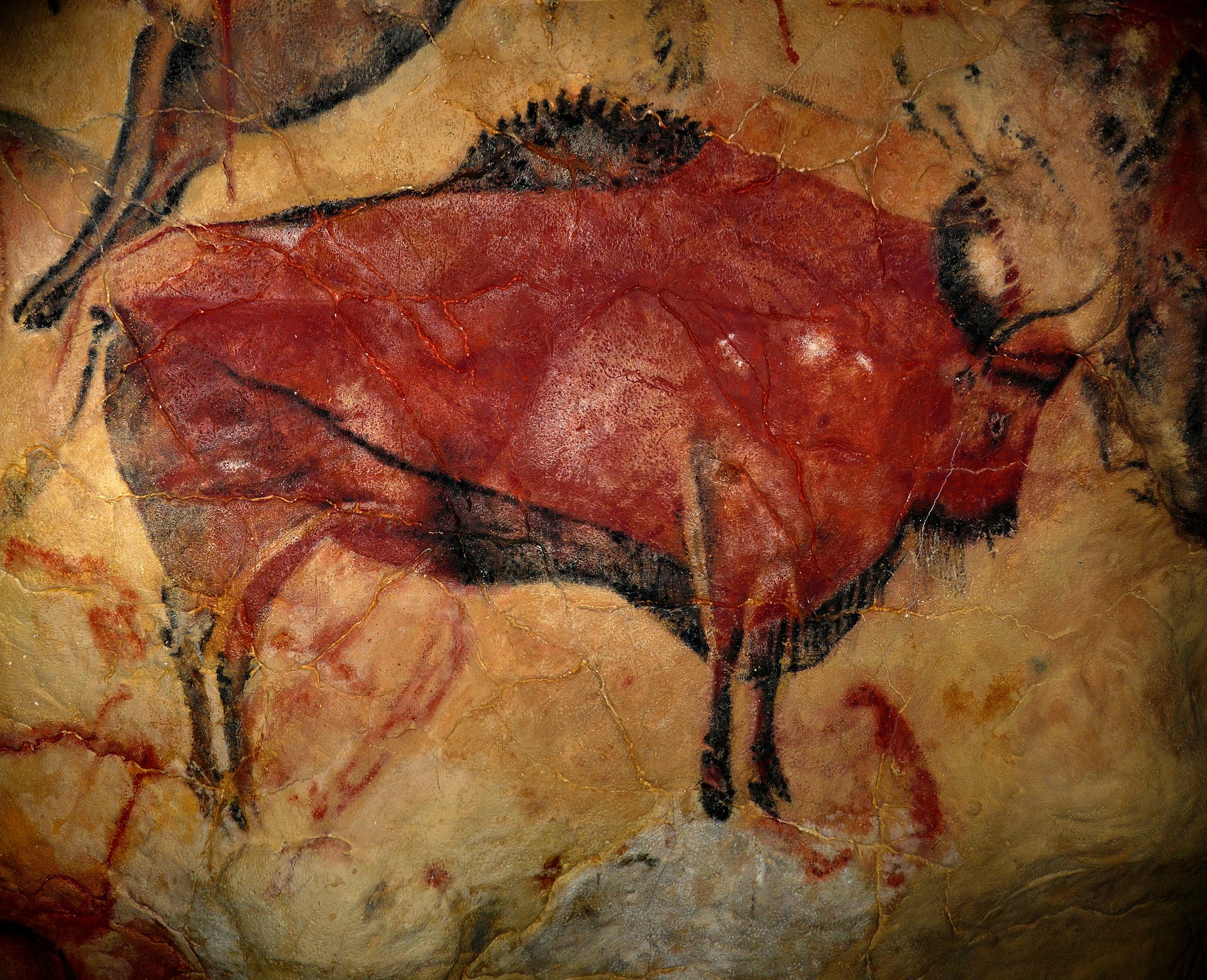 There are interesting caves to explore in north Spain. One definitely stands out, the Cave of Altamira with its palaeolithic cave art. The Cave of Altamira is located near the historic town of Santillana del Mar in Cantabria. The cave features charcoal drawings and polychrome paintings of contemporary local fauna and human hands. The earliest paintings were applied during the Upper Paleolithic, around 36,000 years ago. The site was only discovered in 1868.

The Guggenheim Museum in Bilbao 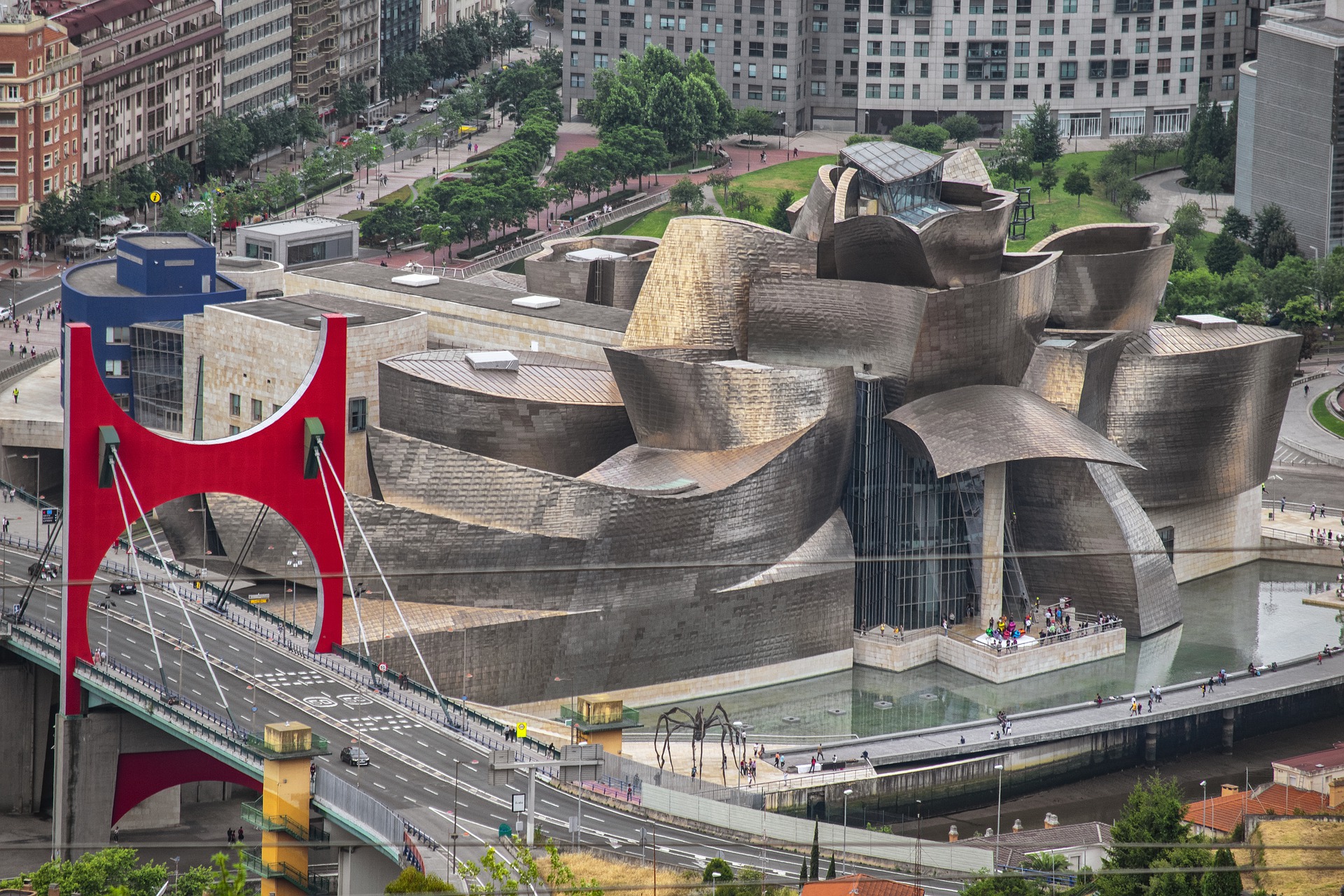 Museuo de Bellas Artes de Asturias  – The Fine Arts Museum of Asturias opened its doors in 1980. Today, the Museum owns one of Spain´s best public art collections, integrated by 15,000 items from the 14th to the 21st Century, with paintings of de El Greco, Goya, Sorolla, Picasso, Dalí and Miró. The Fine Arts Museum of Asturias is installed in a complex of buildings, partially occupying a block close to the Cathedral, in the historical centre of Oviedo.

That Cathedral is worth a visit on its own. A Gothic cathedral that is located in the centre of Oviedo. It is also known as Sancta Ovetensis, referring to the quality and quantity of the relics found within its walls. 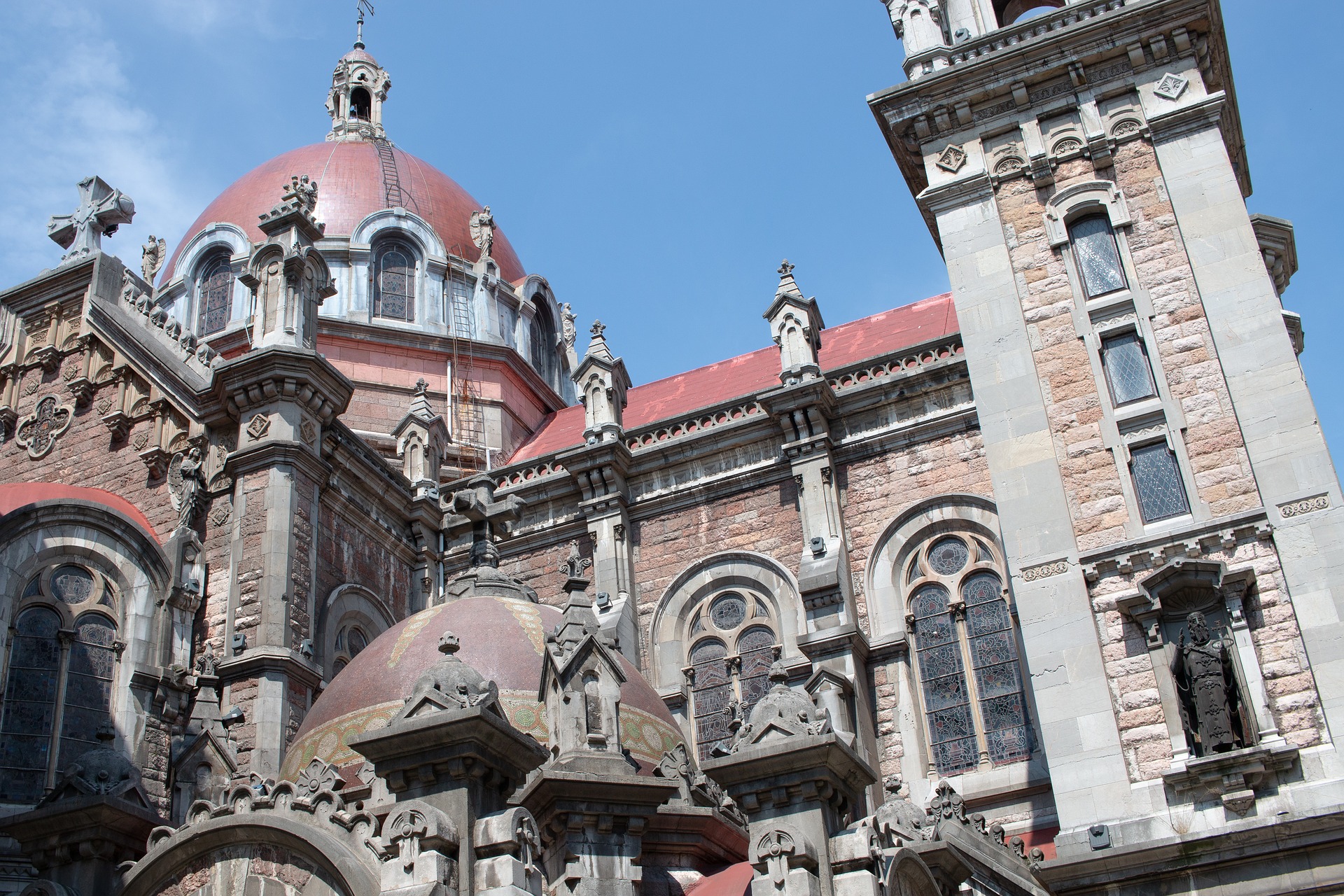 Oviedo Cathedral has been one of the main destinations for pilgrims for many years. Here, the Way of St. James began during the reign of the Pius King Alfonso II the Strong, hence the saying:

« Who goes to Santiago but not to Salvador, visits the servant but not the Lord »

Culture, cute villages, beaches and stunning nature! That is northern Spain in a nutshell. Wouldn’t you like to see it for yourself?